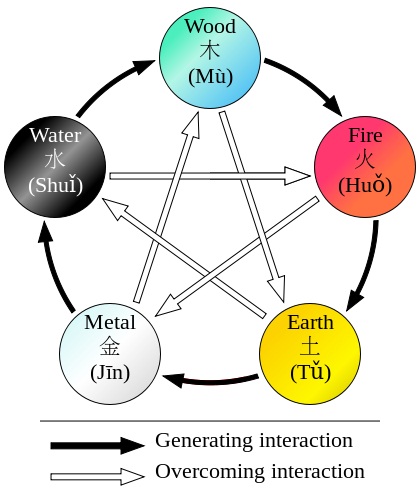 It is clear that each element is extremely powerful on its own, yet their true power comes from the interaction between elements so that the world we live in remains in perfect balance just like the body of an athlete.  Rather than use the traditional elements of western cultures to discuss these ideas we will be turning to the eastern idea of Wu Xing.  Wu Xing is often referred to as the five elements but is more correctly interpreted as the five phases or processes.  The elements or phases used are wood, fire, earth, metal, and water and each often refers to a typical state within nature.  Then 2 cycles are used to describe their interactions with one another.  The first step in program design is seeing how each phase refers to a different season.

In the training of humans these seasons most closely identify with the ideas of periodization.

Upon seeing how each phase relates to basic program design one can then look at the interaction of each element within a phase.  The cycles of Wu Xing that are constantly occurring are known as the generating cycle and the overcoming cycle.  In the generating cycle the phases are in the following order.

In the overcoming cycle the phases are shown in the following order.

If one looks at how each element relates to characteristics of training and competition they can have a better understanding of how to create a more complete and evolving program for athletic performance.  In the generating cycle of athletic performance we can see the following relationships.

When looking at the overcoming cycle one can see just how quickly a lack of balance among the elements and their interactions causes a breakdown in the body’s systems.

While the above are simply examples and may not appear to fit together as well as the cycles of Wu Xing it still gives an excellent example of how the different body systems work in conjunction with one another.  Using the characteristics of each element individually and then using these principles together provides a coach with a potent tool set to create a program that will maximize performance while minimizing setbacks along the way.