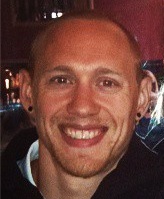 For as long as he can remember; Jeff has been an athlete.  Pick whatever sport you want and odds are he has played it at some point in his lifetime.  In his youth a single year looked something like this; 2 baseball teams, 3 basketball teams, 2 soccer teams, youth track & field meets, and pickup games of other sports like football with friends.  However there was one place that always felt like home; the track.  In fact Jeff’s dad was actually coaching a track meet when he was born.  To this day Jeff can’t remember learning to walk, but his first memories of it are running as a small child on the track.  Upon entering high school he followed in his father’s footsteps as a hurdler and while his individual career was lackluster he managed to win a county championship in the shuttle hurdles team event.  Not quite as good as his dad’s individual county title but a step in the right direction.

After high school Jeff attended Mercer County College and Fairleigh Dickinson University and was unable to compete in track during that time due to the absence of a team.  However the ferocity to compete resulted in stepping into the ring to study the “sweet science” of boxing.  Boxing required running, a lot of hard running, to stay in peak condition for those 3 eternal minutes.  Towards the end of college Jeff watched one of his best friends compete in the NYC Marathon.  The atmosphere was electric and a desire to run like the wind in front of cheering crowds was rekindled.  Luckily that same friend asked him to compete in a 5k a month later to which he said yes since he was running further than that anyway for boxing training.  The rest is history.

In 2008 Jeff completed his first marathon in Philadelphia in a Boston Qualifying time of 3:10:53.  Most marathoners you meet will tell you that crossing that finish line changes you forever.  Upon crossing the finish line Jeff realized that what he really wanted to do in life was to teach and coach others so that they could experience the magic of the marathon.  This ultimately led to a return to school for a degree in exercise science and a discovery of the Ironman Triathlon.  A new challenge was set; qualify to race in Kona at the World Championship and surpass the previous generations of runners in the family.

Jeff is actually the 3rd generation in a running bloodline.  His grandfather on his mother’s side was a national caliber 400m specialist at Fordham University and his father a county record setting hurdler in NJ at Hamilton West High School who later ran at Princeton University.  Since Jeff was a sprinter throughout his youth and has the blood of sprinters, pulling a 180 and entering the world of endurance sports seemed crazy.  Despite the sprinting background in July of 2013 Jeff has started to catch up to his predecessors becoming the inaugural New Jersey State Champion in the 25-29 year old age group for the Olympic Distance Triathlon.  However there is still work to be done to surpass them.

In order to accomplish his goals and help others achieve theirs Jeff uses the most cutting edge practices found in the exercise science world.  He has a degree in Exercise Science and holds certifications as a Functional Movement Specialist, NSCA-CSCS, Hardstyle Kettlebell Instructor, and USAT level 1 Coach.  To meld these techniques together into a training system nature’s elements were used to create a unique holistic approach to sports performance that allows athletes to compete at their highest level.  Every day Jeff strives to be the best coach he can by utilizing the latest science available and continuing to learn more each day by reading the latest research on endurance sport so he can help his athletes achieve their dreams.