Time is certainly flying this year.  The start of the 2014 triathlon season has come and gone in the blink of an eye and it has already been a week since racing in Red Bank.  So without further adieu here is the race report for opening day.

After watching the weather all week leading up to race morning it appeared that it was going to be perfect race conditions for Sunday.  Sure enough the air temperature at the start of the race was right around 60 degrees and the water temperature in the low 60s as well during low tide.

Low tide was something to look forward (or so I  thought), due to the lower salt content of the water and there is typically little to no current in the river at this time.  As if this wasn’t good enough the water looked like glass on this completely wind-less morning.  Of course once we jumped in the Navesink River gushed forth its usual murky black color in water than happened to be only 2-3 feet deep at the starting line.  We waited eagerly to get started while hoping not to step on anything nasty in the think quicksand like mud where we stood.

Finally the gun went off and things were honestly pretty calm compared to past years here or when compared to other races.  I quickly shot up into the lead pack of 3-5 guys and settled into a comfortable pace to keep the heart rate in check and to not burn out early on.  After only a few minutes into the swim I noticed my fingertips hitting what felt like the mud on the bottom of the river yet surely this shouldn’t be the case.  However as time went on it was clear that the river had a record low tide and we were going to be stuck swimming in 2 feet of water for the duration.  The interesting part about this was that it actually allowed me to hone in on a weak link in my swim technique as my left hand was getting a lot more mud with each pull than the right.  This meant that the left elbow was dropping on the pull rather than staying nice and high so while sighting and doing the usual I focused on keeping the elbow up and using the mud as a guide.  As if the shallow wasn’t enough to make things challenging the swim was changed to an out and back course this year.  So after the turn around not only were we forced to sight buoys but there was the added challenge of sighting swimmers who may have strayed off course to avoid a head on collision.  Closing in on the finish ladder out of the river after dealing with all of these less common obstacles was a welcome sight.  By my watch this swim still matched my personal bests and they said I was 5th out of the water so things were off to a good start heading into T1.

After a quick T1 it was finally time to head out onto the hilly bike course that has really wreaked havoc on me the last 2 years.  This would be the first time racing with a power meter so I was wondering how everything would turn out and whether it would keep me under control or possibly even hold me back from reaching my potential.  The goal was to maintain at least 230 watts since that is what testing leading up to the race said I should be able to do.  Overall things were going pretty well up to about the 15 mile mark in the race at which point my old back issue from 2012 decided to rear its ugly head and my feet were pretty much completely numb.  The pain was manageable though and still held onto the 5th position by the end of the bike leg of the race.  Average watts turned out to be 232 so right on target with where I expected to be despite the difficulties.  I still hate the bike.

Luckily the best part of the race was finally here in the run.  Had a blisteringly fast T2 minus the 10 seconds wasted due to the bike falling off the rack and having to turn around to throw it back in place.  The run course is quite hilly just like the bike but at least knowing the route always helps pace yourself accordingly.  Clocked the first mile in 6:24 but then the wheels started to come apart some during the uphill sections.  Clearly was over my racing weight limit as compartment syndrome set in big time by mile 3 and the calves and ankles were screaming in pain as the nerves were pinched and circulation cut off from my feet so everything stayed numb until the race ended.  Couldn’t hang onto the 2 guys that I was pacing with so fell back to 7th but only by maybe 10-15 seconds.  Somehow my run time was only 1 minute off my best time coming off the bike so even though it felt like a terrible run I can’t be too upset with that.

After waiting around for almost 2 hours for the results to get sorted out it turned out I did in fact in the age group.  Despite the many difficulties of the race my times were in line with all of my personal bests so I’d say I’m pretty happy to start the season that way.  There is still a lot of work to be done before TriRock Philly in 5 weeks though! 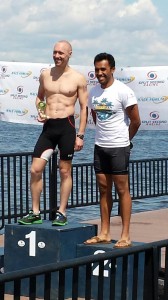 Many months ago I signed up for the USA Triathlon Youth & Junior certification clinic in Boston since it was the next step I wanted to take in my triathlon coaching career as well as having the bonus of re-certifying my level 1 credential.

I always go into continuing education clinics with skepticism because you never know if the speakers and/or information presented is going to be useful or not.  Luckily this clinic was really good and had 5 excellent coaches doing the presentations.  Rather than a total snooze-fest, especially after driving up to Boston at 2am on day 1, each speaker had tons of great information that could be implemented pretty quickly into every day training whether it is with adults or children.

After day 1 ended I somehow found the energy to head out for a nice solid 10 mile run along the Charles River probably from the aid of the perfect running weather.  This really allowed me some time to absorb and ponder all of the information from day one as well as think about my general coaching philosophies.  It dawned on me that I had become a bit complacent in my training programs under the weight of a crazy busy schedule working 4 jobs while in the process of purchasing a house.  Yet this still seemed to be the perfect time to shake things up and force my mind to run in a million different directions with regards to how I coach each and every person.  The reminder of how much knowledge is still out there smacked me square in the face at just the right moment and reminded me how much I enjoy learning new things whenever given the chance.

It has only been 6 days since the clinic but I have already passed the exam and officially become certified to coach youth and junior athletes (ages 7-19) for triathlon.  However the 150 page coaches manual for the certification and the PowerPoint presentations from all of the coaches still have a wealth of information in them I can use to continue the learning process.  I am looking forward to reading through them each once, and then probably several more times in the near future.

Keep reading, keep learning, keep experiencing new things and trying different strategies while refining what you already do well.  Sounds like a plan.

Well it has already been 9 months since I created this website to blog about anything and everything and most likely a whole lot about triathlon.  Low and behold despite my best intentions of wanting to blog weekly time has simply passed with nothing but crickets on here.  I guess that is what happens when life suddenly takes you by storm and schedules get hectic.  These pages will be full of writing in the very near future.  For real this time!